The children in both Key stages have been creating Peace Poetry to send to our French school. They produced some lovely pieces of work to show their commitment to global citizenship. We are waiting in anticipation for the responses from our French school.

Bienvenu a notre page de classe!
Welcome to our French page! In Lower Key stage 2 , the children have been learning how to have short conversations with each other whilst presenting themselves. In upper Key stage 2, the children are using their reading skills to read short phrases and sentences. They have also been using aspects of grammar in order to write short sentences and say them out loud.

We have been using Kagan strategies for group work and the children are really enjoying this method of learning. Across both Key Stages, the children have been learning French through stories, songs and drama. Our French school links are being developed also with ‘ L’ecole de St Etienne’ and each Year group have contributed to developing their communication with their partner classes.

Our French school is L’Ecole de St Etienne, which is situated in Eastern central France. The town of St Etienne is Saint-Étienne became a popular stop for automobile travellers in the early 20th century (sometimes referred to as The Golden Age of Travel.

The last convention was in March 2013. A landmark in the history of the importance ascribed to design in Saint-Étienne was the inauguration of La Cité du design on the site of the former arms factory in 2009.

The city also launched the Massenete festivals (the composer Jules Massenet hailed from the area) devoted mainly to perform Massenet's operas. In 2000, the city was named one of the French towns and Lands of Art.  On 22 November 2010, it was nominated as "City of Design" as part of Unesco’s Creative cities network. 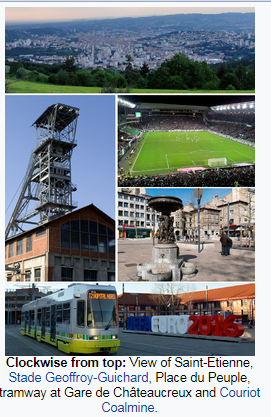